Nick visited our stand at Grand Designs Live at the NEC, but didn’t get to meet us as the stand was very busy. He then called us the following day from the plot that he’d been looking at, to find out what options we might have that would fit on it. We identified that a variation on one of our houses that was originally designed for a sloping site would work best for him. As an experienced project manager, he wanted to be very hands on with his self build. Together, we concluded that a shell build would be ideal, where we left the house wind and watertight for him to complete.
His planning application went smoothly, and he then arranged for demolition of the original bungalow on the site. The Scandinavian Homes team organised the foundations using our recommended insulated slab system from Advanced Foundation Technology.

When it came to erect the house, strong winds meant that one day was lost during the first week (you can’t have heavy panels swinging from a crane in windy weather – it’s just not safe!), but the team still managed to get the house up to roof level by the end of the week. The shell build was completed in around four weeks, and Nick then took over the project, spending evenings and weekends organising his own electrician and plumber, and doing some of the internal finishing himself, ending up with a house completed exactly how he wants it. 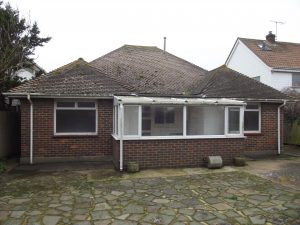 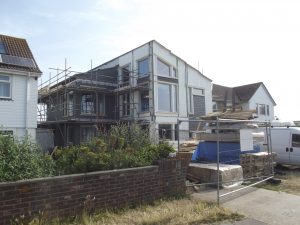