Robert and Jen had wanted to self build for a long time, and really admired the architecture of the modernist era. They also wanted a stylish, energy efficient house (rather than the lovely, but draughty, Victorian terrace they’d lived in for several years). They initially met the Scandinavian Homes team in 2013 and loved the modernist Kontti D house design from the idea portfolio straight away. Unfortunately it didn’t fit on the plot they initially found, so they selected a different design that worked better for that plot.

The couple then both became unwell, and had to let the plot go. After some time, they both recovered and decided to pursue their dream. When visiting relatives in South Wales, they came across a large plot, situated in an old orchard, near to a good range of facilities yet in a peaceful situation. To their joy they found the Kontti D house they’d loved all along would fit nicely on the plot, and would make the most of the south facing view. Since they’d wanted to move to the area anyway to be near family, this was a perfect opportunity. 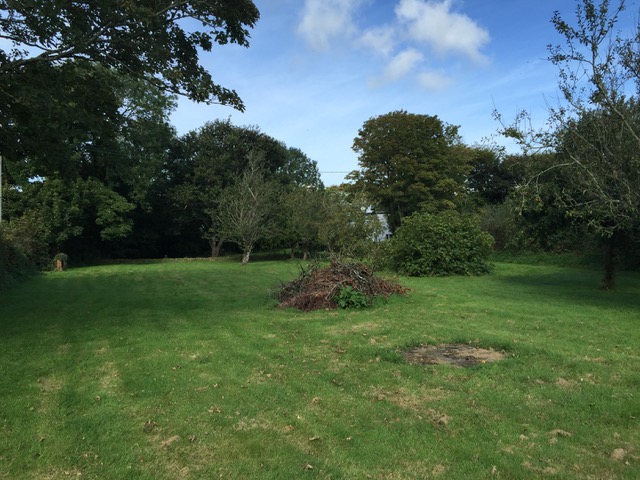 Over the next few months, they met with the Scandinavian Homes team on a number of occasions, working out exactly how they wanted their home, putting together design ideas and using a ‘shared folder’ that both they and the Scandinavian Homes team could contribute to. They decided to upgrade from the standard specification to include underfloor heating, with an air source heat pump that provides both heating and hot water. They also chose a high end kitchen design, and added a large decked area to the rear of the house so that they could make the most of the large sliding doors in the lounge and bedroom.

The build started in mid August 2017 with the creation of a super-insulated raft foundation with the underfloor heating pipework included in the slab. The house frame was delivered and erected during the first week of September 2017 (in a very wet week!). The couple had sold the family home to fund the build, and were living in their holiday home for the duration, so they relied on daily updates from the site – in Robert’s words from the end of the first week of the frame construction “Its gone 1am and I just want to say that seeing the photos has made us realise why we wanted to do this. It was a concept for so long and now the reality confirms why.” 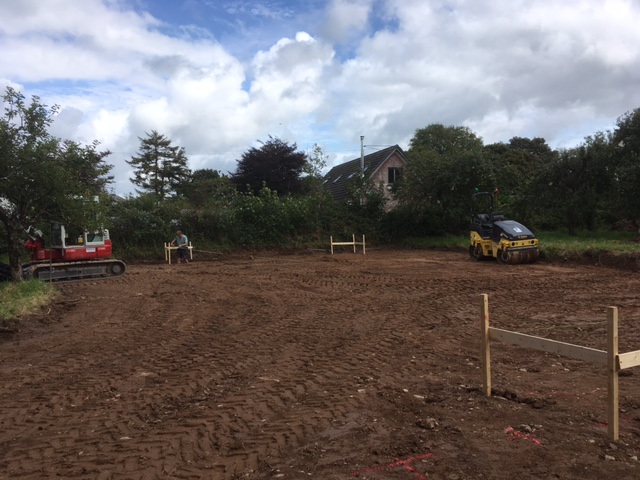 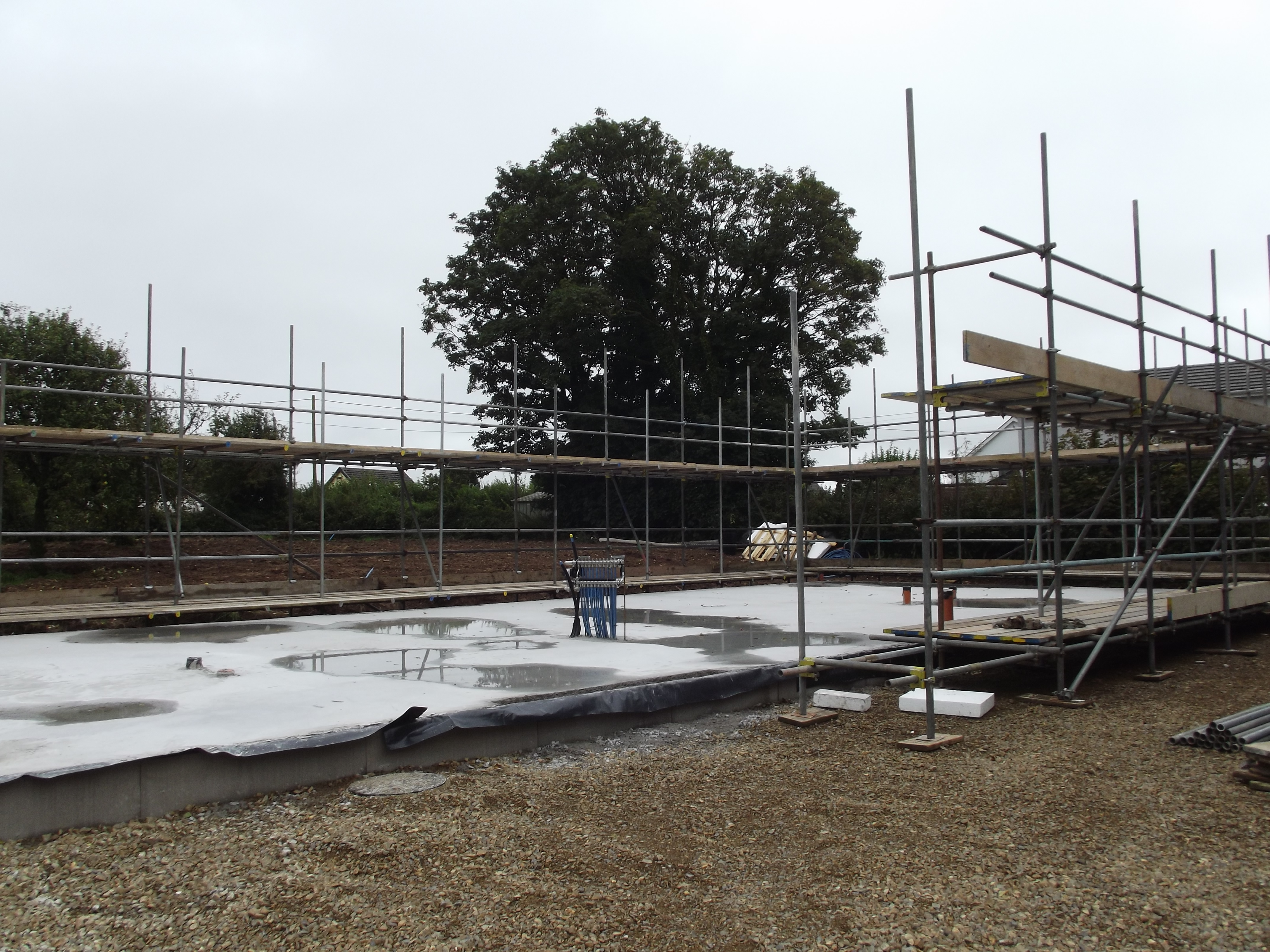 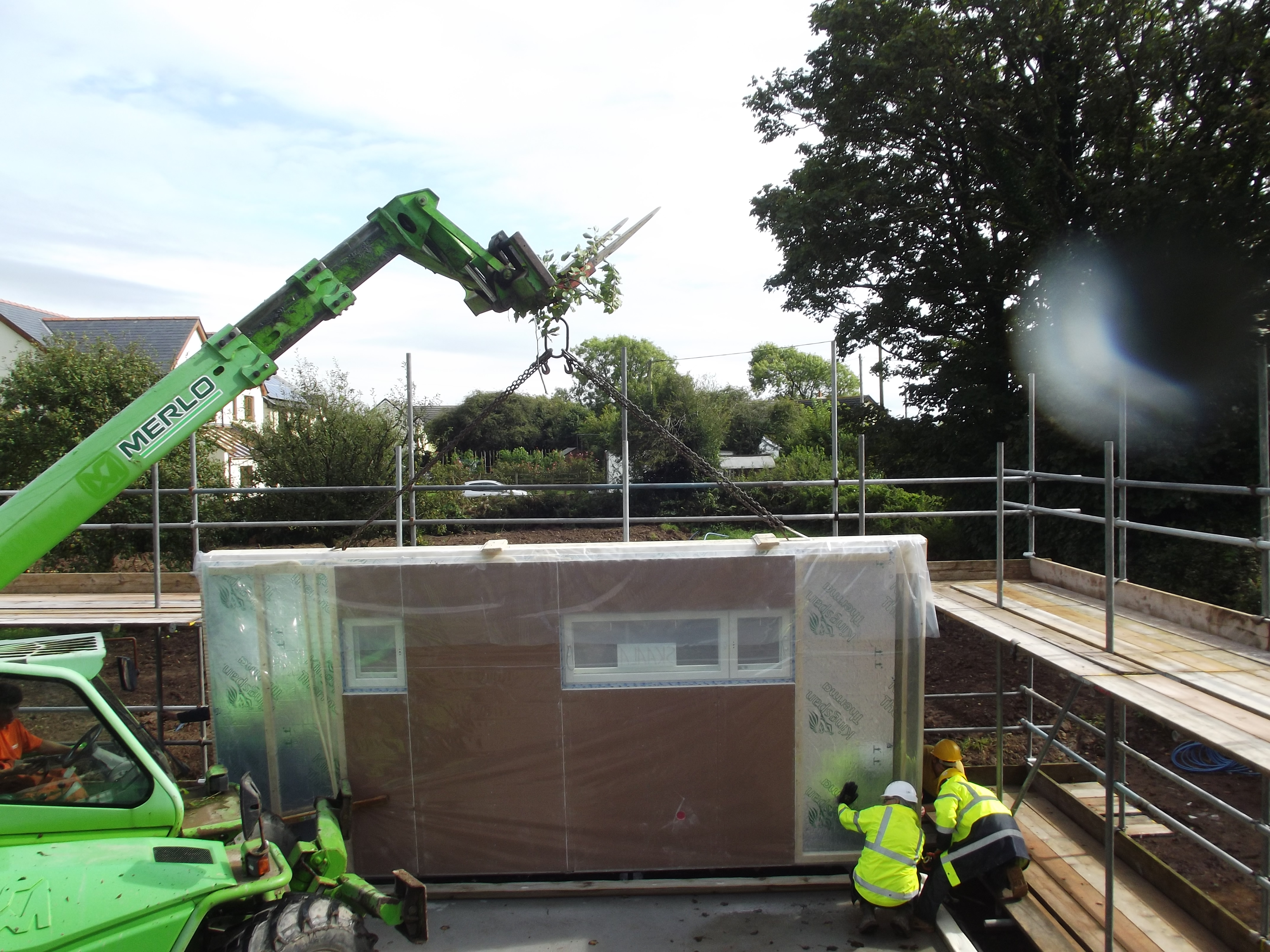 First panel in place – day 1 of build. Yes, you can use a Telehandler rather than a crane to build these houses – just as well when there are overhead wires in the way and access is rather restricted! This would not have worked for a two storey building though. 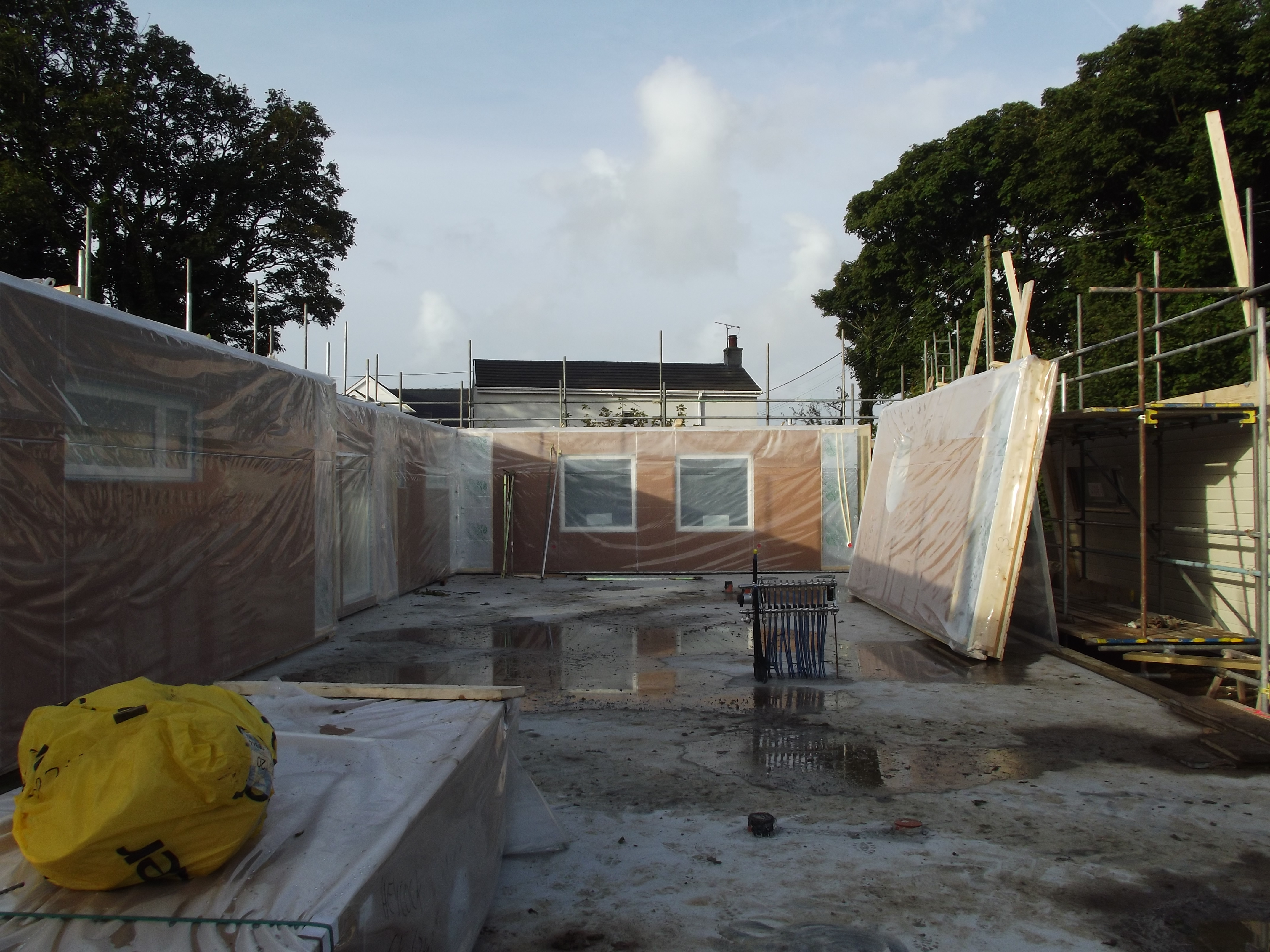 New day new weather – day 2 of build. Note the UFH manifold coming up from the slab. 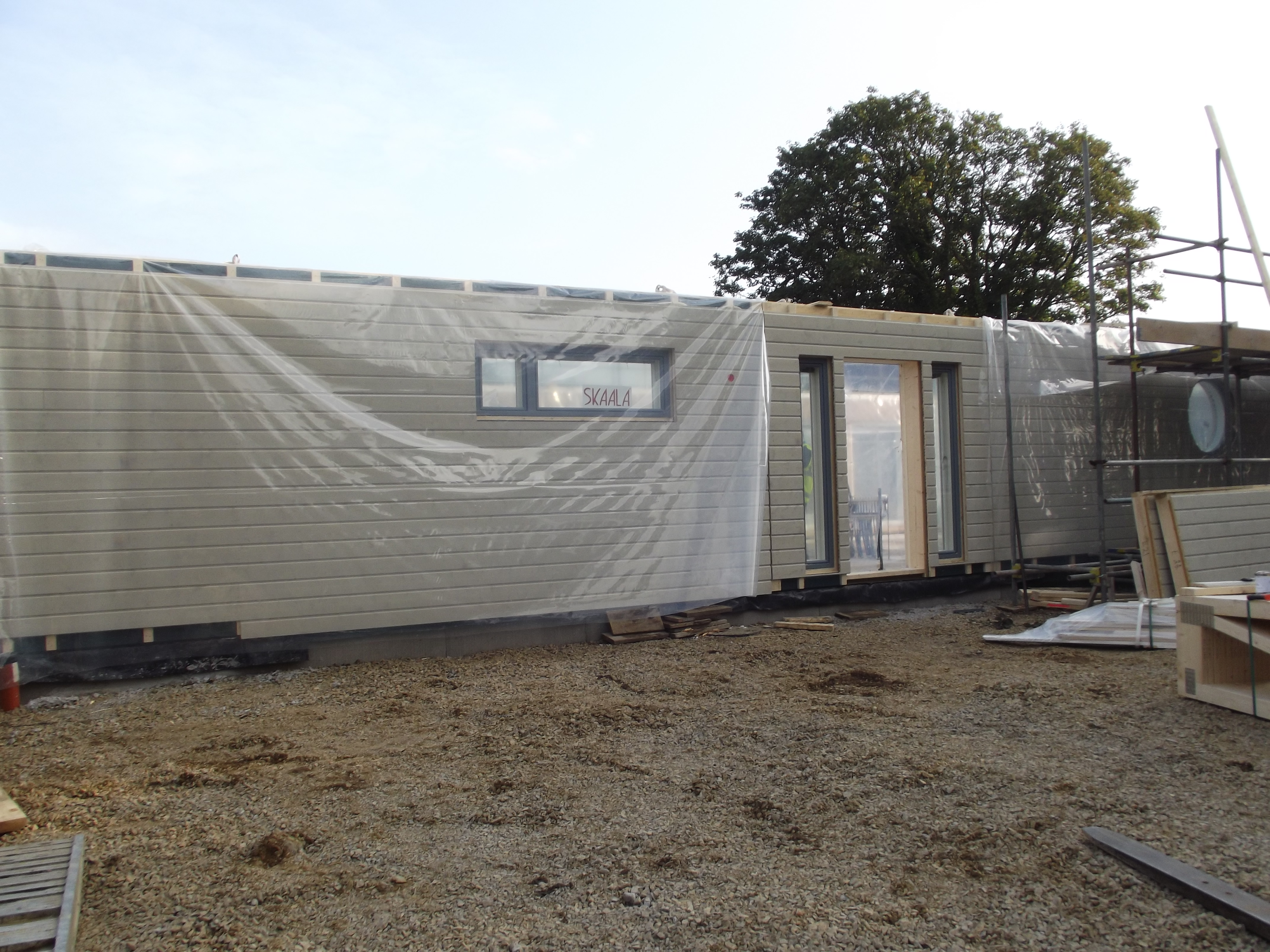 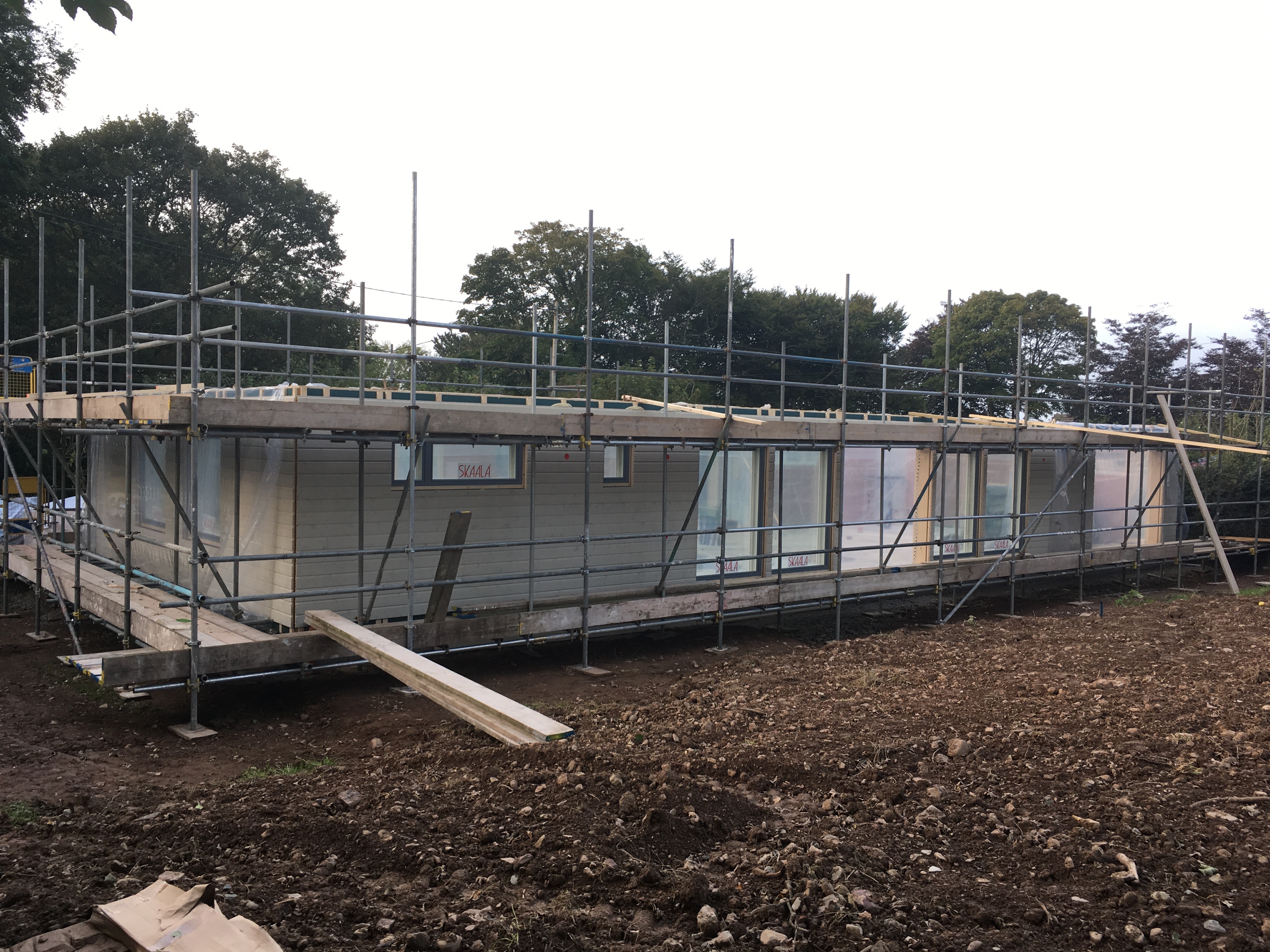 House from back garden – day 3

Roofline – all the roof trusses are now in place, ready to be braced – day 4 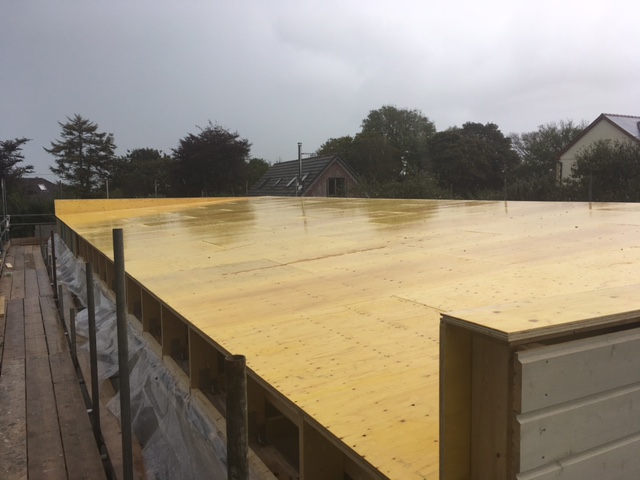 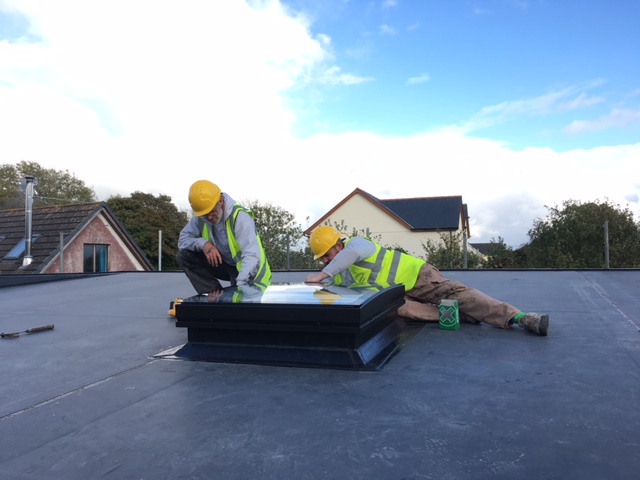 Roof window and now roofed – day 6 – the sun came out! 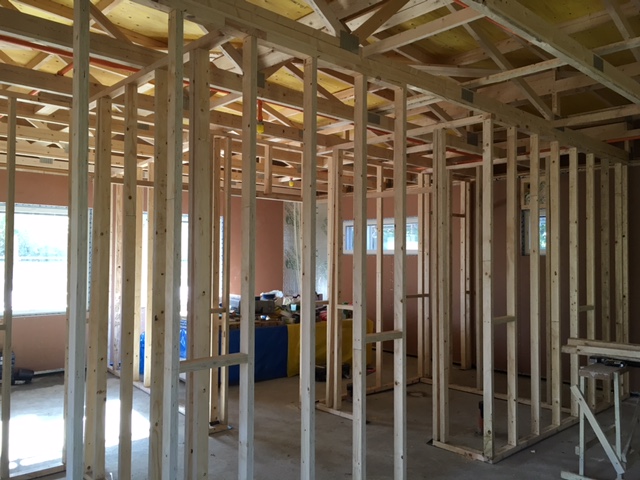 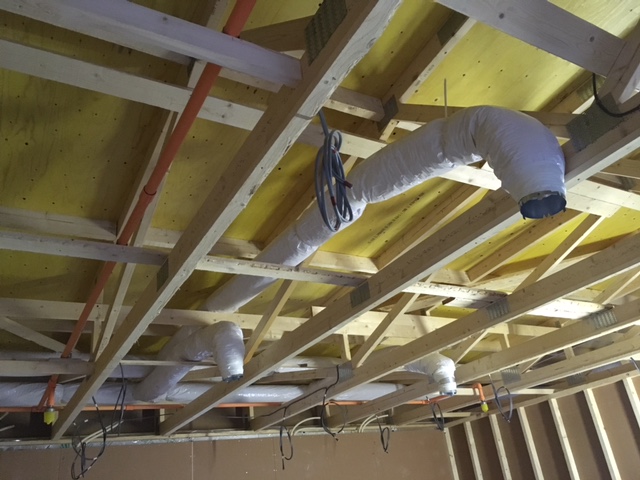 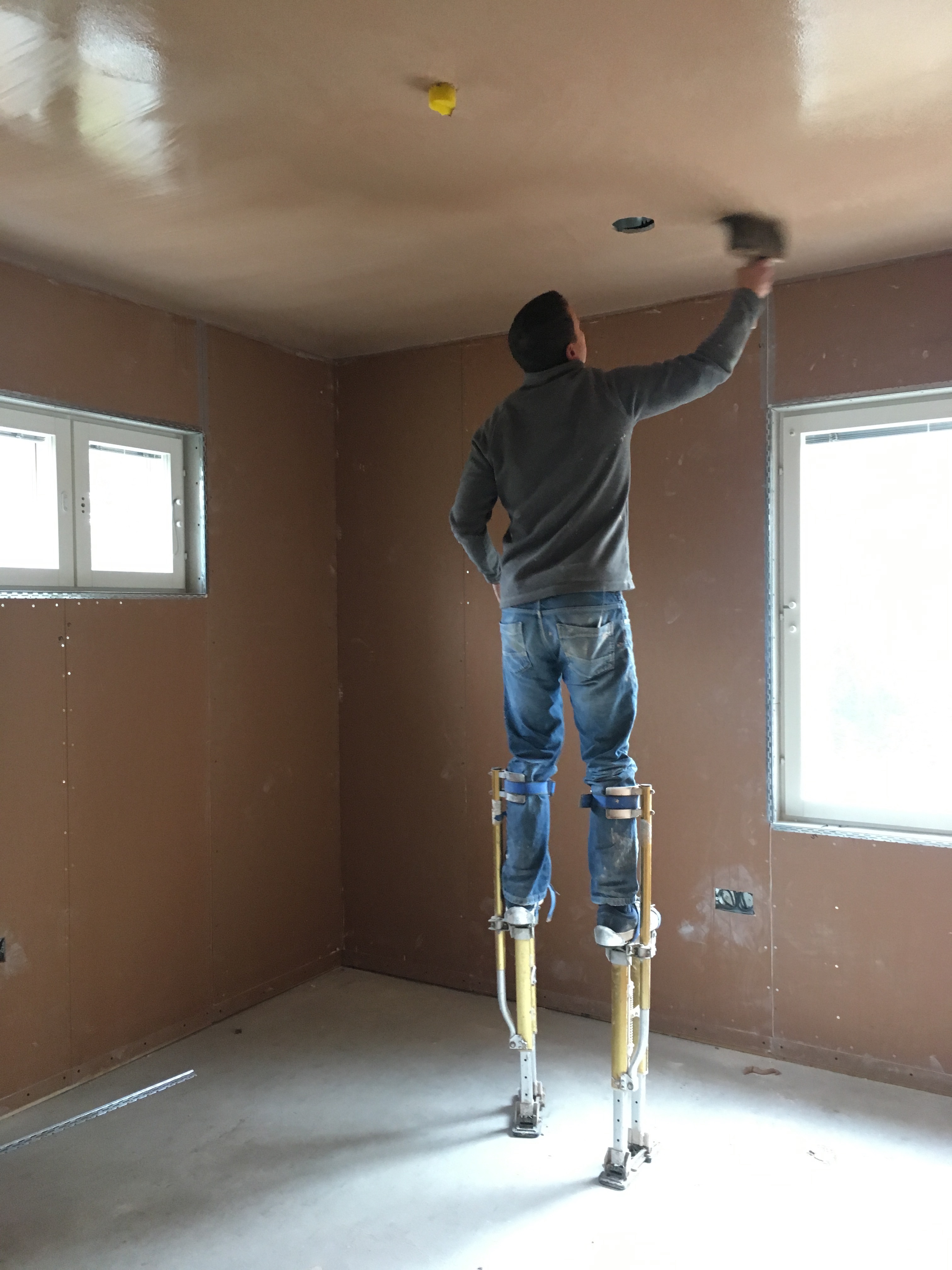 Plastering in progress (on stilts) 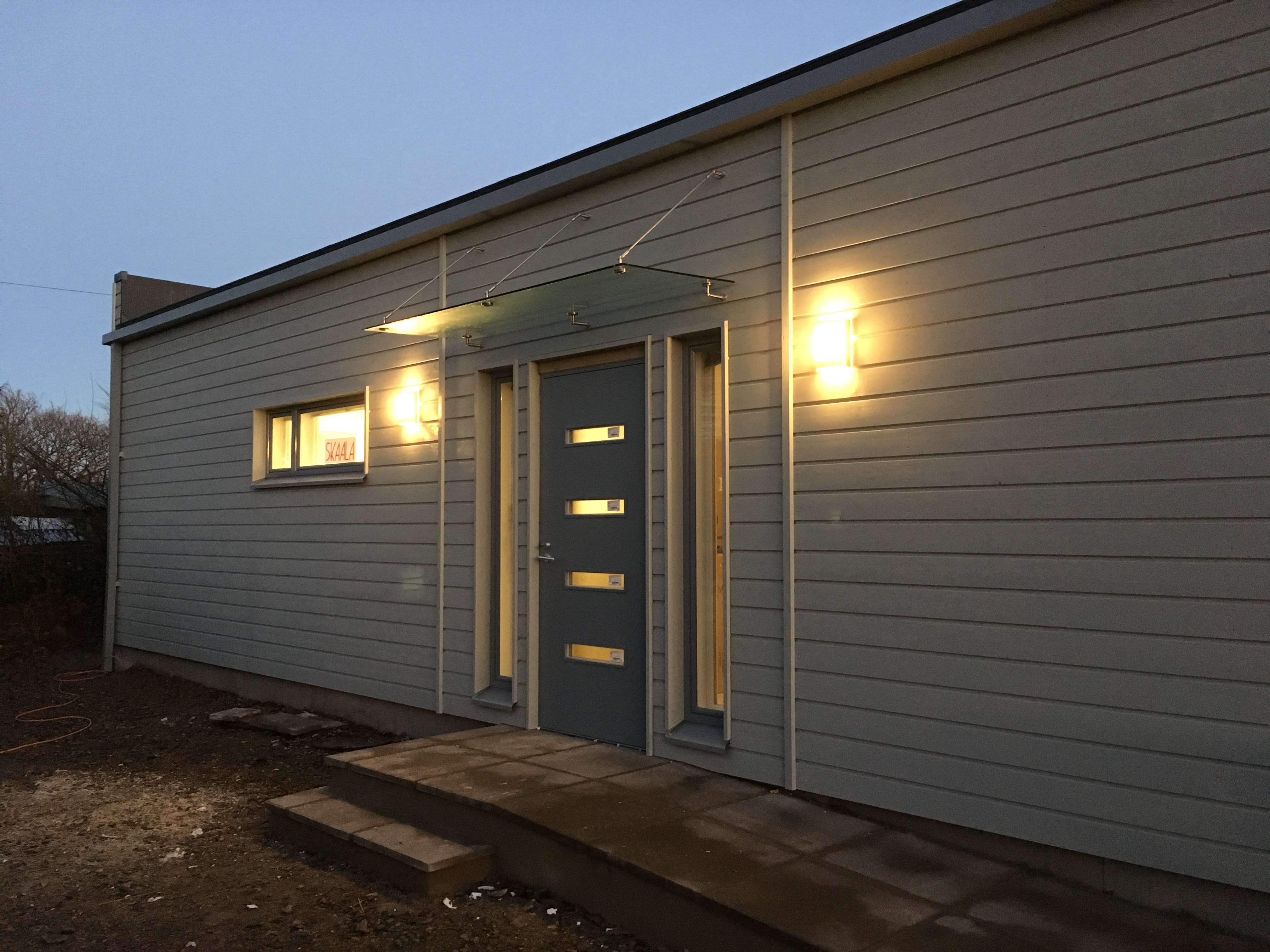 An external shot from the front 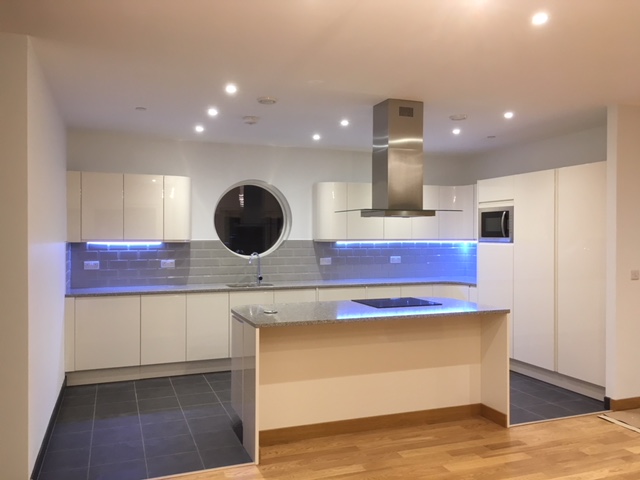 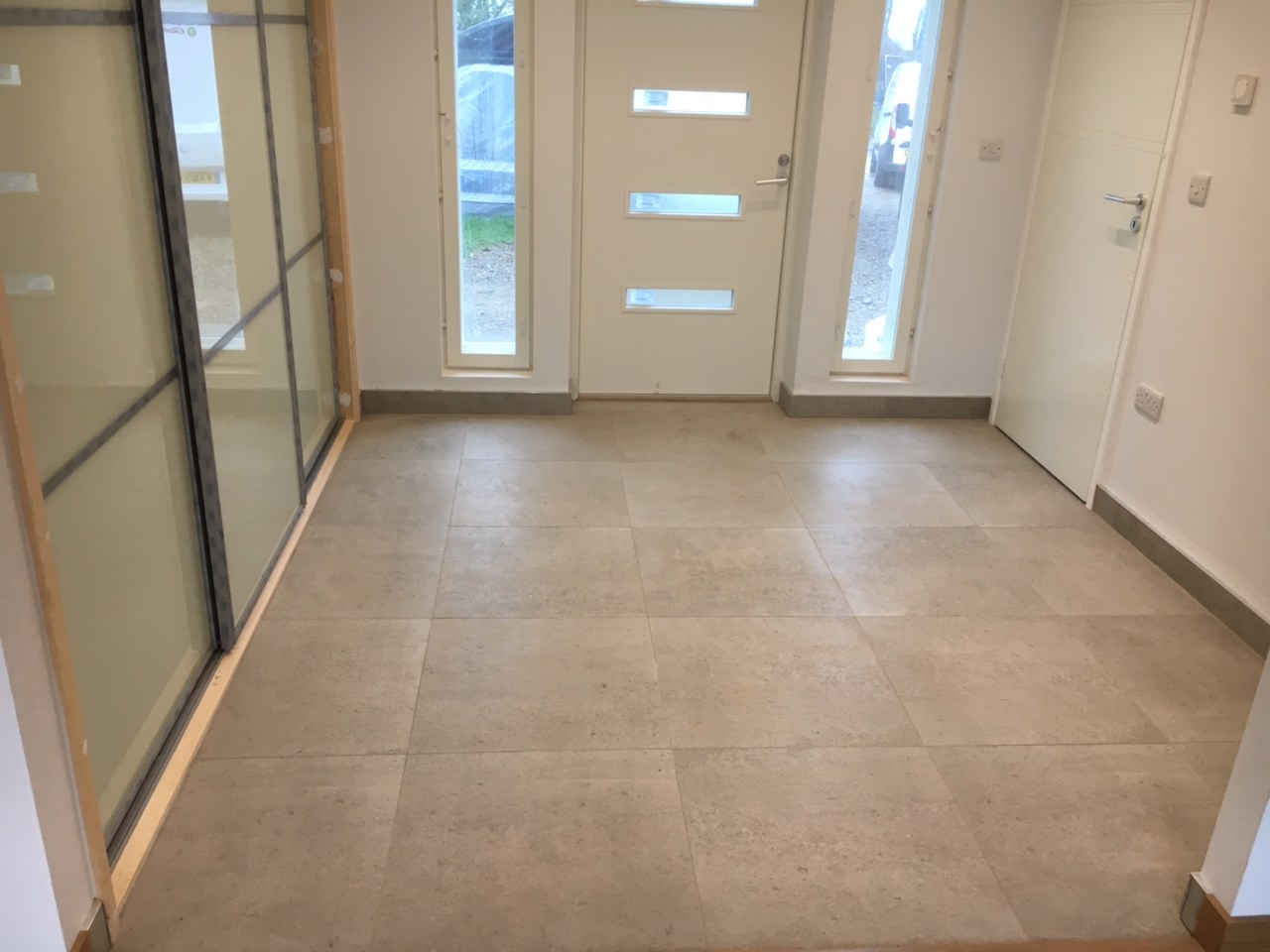 Entrance hall from inside

The build progressed relatively smoothly and the couple were updated almost daily from site with emails and again with the team uploading photos to the shared folder. They visited the site in late October when the the bathrooms were being fitted out, which was useful as they could then make decisions about tiling.

A minor delay arose right at the end of the build process, when the connection to the water supply took longer than planned as the water pipe wasn’t where it was supposed to be. Even the best made plans can still go astray. As this meant that neighbours needed to be informed, the connection had to be delayed slightly. They moved in to their new home in January 2018, and enjoyed being able to live indoors in T-shirts during a very cold, late Spring when there was snow on the ground outside. 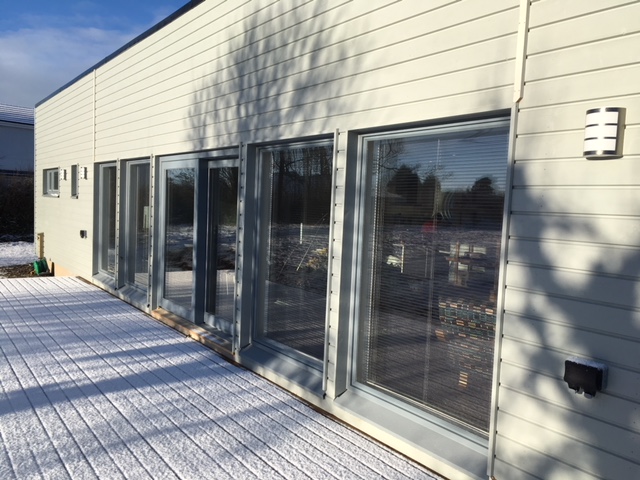 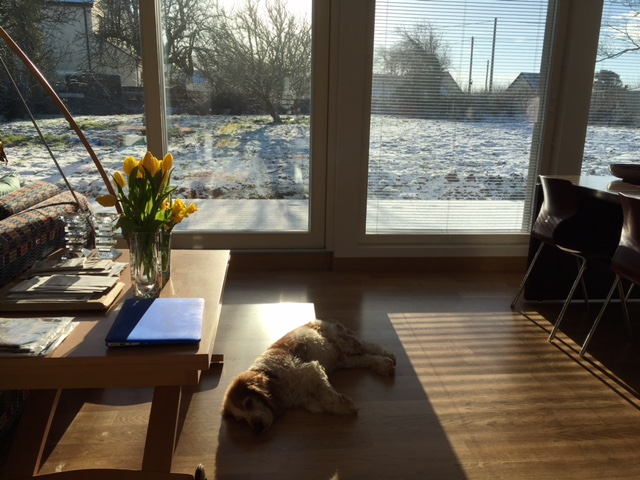