Walter Segal, Timber Frame Self Building, and the Community Self Build Initiative

Go to page: Walter Segal, Timber Frame Self Building, and the Community Self Build Initiative

If you are interested in the idea of building your own home, you may well have come across the concept of “community self build”. You might also be aware that timber buildings tend to go up faster than the brick and block style of construction that is standard in the UK. What you may not realise is where these two things first came together in the UK to produce affordable housing that was as individual as its owners. The fascinating architect behind the ideas, Walter Segal, was born in Germany in 1907, and raised in a village next to an anarchist colony in the Swiss hills, greatly influencing his formative years. Segal studied architecture in Berlin, thanks to his artist father’s patron sponsoring him. A manual that he picked up on the American tradition of timber frame house building seems also to have influenced his thinking. In 1932, Bernhard Mayer, the patron, asked him to build a little wooden holiday cabin for him at Ascona, where Segal had grown up, one of his earliest commissions.

In 1936, Segal moved to London and met a fellow architect called Eva Bradt, who became his partner in both senses of the word, and made a career, albeit not a hugely financially successful one, working on small, individual projects, writing in trade journals, and teaching at the Architectural Association School. He also wrote two books, “Home and Environment” (Leonard Hill 1948, 1953) and “Planning and Transport: Their Effects on Industry and Residence” (Dent, for the Cooperative Permanent Building Society, 1945).

The breakthrough moment that defined his influence on self-build housing came in 1960 when Walter and his new partner (Eva having died in 1950) decided to demolish their existing house in Highgate to build a larger one to better accommodate their 6 children. Walter built a small temporary house at the bottom of the garden, for the family to live in while their new home was being built. It was made from timber, with paving slabs as foundations and using standard cladding materials (so that he could reuse them). It took two weeks to build and cost a mere £800. This led to Walter being commissioned to build several more similar structures, and as he worked, he refined his principles and made it easier for people to work on the houses themselves, rather than needing to employ tradesmen. 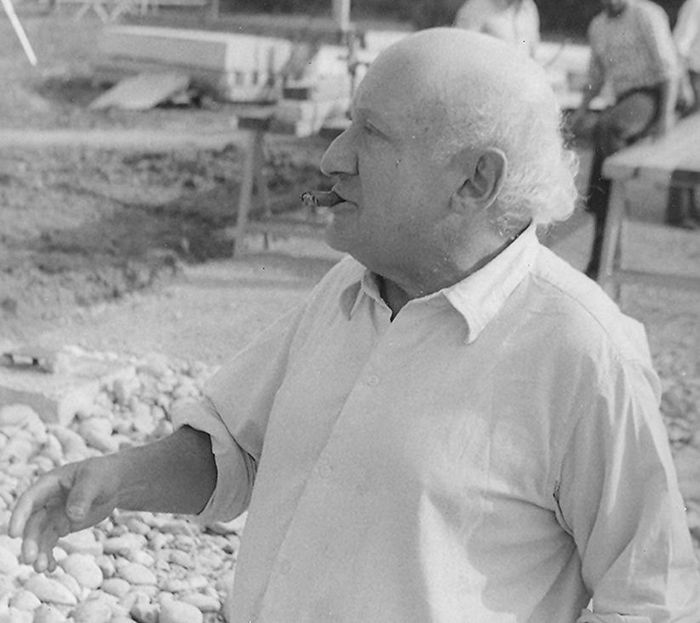 In the mid 70s, in response to the increasing crisis in housing in the UK (yes, even back then!), Lewisham council agreed to a pioneer project of self-build homes using Segal’s building method on two pieces of land that weren’t suitable for the council’s own housing projects. These eventually, after several years of delay, became Walter’s Way and Segal Close. Each self-builder on the two schemes purchased part of the house on a 99-year lease from the council, then paid part of the standard council rent for the balance of the equity. The lease price was reduced to account for the self-builder’s labour to build the house, and they were guaranteed a council mortgage. Many of the builders were able to buy their homes fairly quickly. Segal never saw the second of the two projects completed, as he died in 1985. He remains the only architect in the UK to have two streets named after him.

The Segal method is based on traditional timber frame building, modified to use standard modern materials. He did away with the need for bricklaying and plastering, producing a light-weight building that can be built by people with minimal experience and is ecologically sound. The roofs are usually flat with layers of roofing felt, encouraging the creation of grass-covered roofs. Foundations are basic, often just paving slabs. Segal houses have been compared to traditional Japanese houses. With timber frame and off-site construction methods becoming fashionable at the moment, the simplicity of the Segal method may become more attractive to those wishing to take the hands-on route to self-build.

The local council in Ladywell, not too far from Walter’s Way, has signed over a piece of land on a long-term lease to the Rural Urban Synthesis Society (Russ), a community land trust (CLT) set up by Kareem Dayes, son of one of the original self-builders who still lives in Walter’s Way, to develop 33 new homes for a mix of affordable tenures. Unlike the original Segal projects, the Ladywell housing will remain affordable in perpetuity, with rents linked to local incomes through the CLT, which will hold a minimum 20% stake in each home.

The architectural practices working on the scheme are Architype (run by Bob Hayes) and Jon Broome Architects, the founders of which both worked with Segal and continued to develop his method in projects across the country. Their design, which adheres to Passivhaus standards of energy efficiency, includes big terraces for shared gardens and food production, as well as a community hall and kitchen for community meetings, performances and childcare.

Since CLTs are immune from the government’s recent extension of right to buy, it is a model that guarantees the long-term provision of affordable housing and good use of publicly owned land. Walter Segal would most definitely approve!

If you’d like to know more about the life and work of Walter Segal http://www.segalselfbuild.co.uk/home.html
If you’d like to find out how you can set up or get involved with a CLT, contact the Community Self Build Agency http://www.communityselfbuildagency.org.uk/about.html
If you would like to build a timber frame house, you can look at our range of houses on our website www.scandinavianhomes.com or read about more general principles at https://www.selfbuild-central.co.uk/construction/main-structure/timber-frame/

View our homes Contact us for more information
Add your email to our newsletter database and receive useful information, show dates, and product and industry news 4-5 times a year.